Buffalo is not the worst team in Hockey, they are not even the worst in the Eastern Conference. They are in the #12 spot, there are 15 teams in the Eastern Conference, so yes they are down there. Pittsburgh is in first place, Pittsburgh won 15 games in a row and was on their way to winning #16 tonight. I don’t know if they were overconfident or if Buffalo just decided ‘Hey we aren’t going away’, but Buffalo beat them. Of course, Buffalo is still in 12th place and Pittsburgh is still in 1st place so I don’t know if it actually means anything, maybe it means good things for the team that meets them next putting a little dent in their confidence, maybe it will cause Pittsburgh to gain focus, realize they can’t take wins for granted. Maybe athletes don’t think that way, going into play a team that is not doing well, do they bring their ‘A’ game anyway, thinking these players are professional athletes, they made it to the big leagues, they could beat us or do they just relax and think, we got this. Having never been on a professional nor even knowing any I can’t say. I think I know why Buffalo so often loses in the last minutes of the game though, their goalie gets tired! I have noticed that other teams often make tons more shots on goal than Buffalo does. Just my two cents.

Of this game Ott said they played well, consistently, even I could see that. I hope they can do more of the same.

Today was a big trade day for hockey, the Sabres traded Jason Pominville to the Minnesota Wild and in return they got Johan Larsson, Matt Hackett, and 2 draft selections. They need more better players, I guess this is a good move, even though Pominville is a pretty good player. There was speculation that Ryan Miller would get traded, that didn’t happen but this could be his last year with the Sabres anyway.

Enjoy the picture below and I’m off to write about the Yankees second loss to the Red Sox.

Next Monday is Opening Day. I don’t know if I have ever been this excited for a Monday. I will be in the Bronx at the game if I have to beg for food for a month, if I have to sell a kidney, if I have to sell my best friend’s kidney, by now you should get the picture. I have been waiting for this day since the last out of the World Series.

During the off-season, I tried to amuse myself. I started watching football. Most of my life (sports fan life that is) I’ve been a Bills fan. Last year and this year I have been following the Ravens. They have purple uniforms. They made it to the playoffs, but no one expected them to make it to the SuperBowl. I bought a red and black wig to wear to a Super Bowl party and cheer the 49ers on to victory over the Patriots. I guess Tom Brady is not as good a quarterback as he thinks he is because the Ravens beat the Patriots. Which was after they beat Payton Manning which they also weren’t supposed to do. So I ended up wearing purple and black and the red and black wig is still unworn. I will find an occasion to wear it.

Hockey has also become a minor obsession with me. Last year I thought I would follow the Islanders, but interacting with Islander fans proved to be problematic. First were the questions: You don’t live on Long Island, why do you want to be an Islander fan? I could understand that question coming from a Rangers or Devils fan, but this was from Islander fans, like they didn’t want me to become an Islander fan until I moved to the Island. Then I stated on the Islander’s game chat that Kevin Poulin was cute. Hmmmm dead silence (well he IS). Then I made the ultimate mistake, I said that J.T. looked hot in the cool black jerseys, only to be told that the black jerseys are hideous (they’re not, they’re cool and J.T. is hot even if he’s not wearing …. never mind). Thoroughly pissed off I started looking around for another hockey team to follow, it was suggested that since I am from Buffalo, I should follow the Sabres. So I am, and the Sabres suck, they’re as bad as the Islanders and as bad as the Bills are, but they are my team. Even though right now I’d like to shoot all the players off into outer space. Just don’t expect any profound hockey analysis. 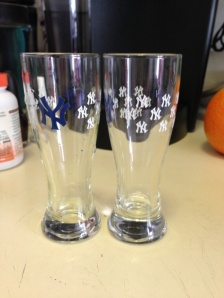 But baseball, baseball is back, or will be soon. Jumping up and down and yelling at my TV will commence within days. Before you ask, yes I WILL be rooting for Youkilis, he’s a Yankee, as soon as a player puts on the pinstripes he is one of my boys and I support him. Doesn’t matter what team he comes from or how much I hated him as a Red Sox, I’m rooting for him now.

Right now is spring training which doesn’t count, and boy am I glad it doesn’t count since the Yankees are in last place. Oh and they are dropping like flies, it seems like every day someone is injured. First game of spring training, Curtis Granderson gets hit on the arm and his bone is fractured. Then Teixeira goes out with a sprained wrist. Derek Jeter has swelling in his ankle, Phil Hughes is out with back issues, today Boone Logan got hit with a line drive in his “fat”, translation butt-cheek, and A-Rod is better known these days and A-WHO? As in, when was the last time we saw him, or for that matter anything was written about him? They should change their name from the NY Yankees, to the NY Walking Wounded, but Mo is back and he says they will find a way to get it done. If not, I will be putting these to good use and might actually see the bottom of my Jameson’s bottle.