The Tigers were rowdy tonight. Apparently in the last play of Monday’s game (which we lost) Gardner slide into the 2nd baseman and now he is on the D.L. (the Tiger’s player, not Gardner). Tonight, after a scoreless first inning by the Tigers, Gardner is in the lead-off spot and gets hit. Intentional? Retaliation? Some say yes, some say no. Some say Gardner’s slide was ‘dirty’, some say it was the SS fault because of the way he threw the ball. When asked Gardner said, “I don’t know, I don’t care. They want to put me on base that’s fine with me as long as I don’t get hurt.”

Teixeira made them pay. With Gardner still on base he hit a home run. Then Cano hit a home run. 0-3 Yankees. Then Cabrera of the Tigers hit a home run and at his second at bat, another home run. The Yankees struck back with 3 runs in the 4th bring the score to 2-6 Yankees. It takes a lot to tame kittens, especially tiger cubs. They came back with a 2 run homer. That was it for Moseley. Curtis got one of the runs back with his own home run. That made it 3 home runs for the Yankees and 3 for the Tigers. 4-7 Yankees.

Moseley pitched all right. But coming out early meant a lot of work for the bull pen, Joba, Logan, Wood, Gaudin, D-Rob and Mo all pitched. Wood had to get out a bases loaded, 1 out and Cabrera coming up the 3rd next pitcher. A home run hitter coming up with bases loaded? No, just no. He struck out the next two hitters. D-Rob had to do the same thing, only in his case Gaudin had loaded the bases. He looked so nervous, and when he threw the ball to Mark for the last out, after only giving up one run, he looked so happy. This inning started with Cabrera coming up to bat and getting plunked by Gaudin. That’s when things started to get ugly. The Tiger’s manager came out and started yelling, about what I don’t know. He wouldn’t answer any questions after the game. Then Jeter was walked, and one of the balls went behind his back.

Was it intentional on Gaudin’s part? I don’t think so. Yankees were up by 5 runs, so they had already proved their point, and I don’t think Gaudin is a good enough pitcher to intentionally hit someone like that. Oh and that nice Johnny Damon? Who got such a nice ovation, and told Michael Kay how much better New York is then Boston, he was one of the ones saying Brett’s slide was dirty. Maybe he is little bitter.

This post was possible because I started keeping score. These are my score sheets. This first one is for Detroit. Noticed how I colored in the boxes with brown pencil? That’s because I don’t like the Tigers and I don’t like brown. 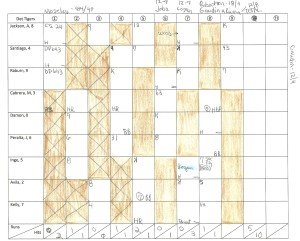 This one is for the Yankees. Notice the blue boxes? And the darker colored boxes are purple, that is where the home runs are. Because I like blue and I love purple. I love my Yankees and I especially love home runs.